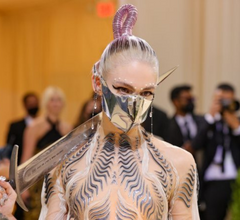 Grimes launches "AI Girl group" NPC, shares first single "A Drug from God." According to a press release, the virtual group has infinite members that “can be voted in or out, except for core members such as the baby Warnymph”.

The project will serve as “a vehicle for experimentation in new technologies as they become available”, such as “generative characters and music, [different] types of animation, AI-assisted art as well as spiritual technology”.

There's been some very cool experiments and cultivation of AI technology in music creation (Holly Herndon being the best recent example, perhaps) but this really does take things to the next level. Totally zany, but kudos to Grimes for pushing the boundaries of what is possible. Via NME