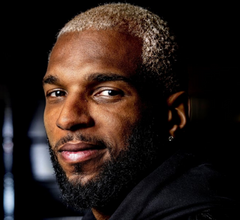 Babel releases his autobiography today – nothing extraordinary in that, he is 34 and in the final stages of an eventful career, after all (pretty underwhelming for Liverpool we thought...) But this autobiography is an eight-track rap album written and performed by the Netherlands forward.

“The whole point was to try to do something different, something creative and something that hasn’t been done before,” says Babel. He has released two singles from the album so far – "Young Champ" and "Reminder." A third, "Open Letter," caused a stir in the Netherlands for criticising his former international teammate Ibrahim Afellay.

Former coaches, and the racist abuse that Bukayo Saka, Marcus Rashford and Jadon Sancho were subjected to after the Euro 2020 final, are also addressed. Fair play to him for pushing the boat out and using his platfrom to speak up on important issues. We forgive you for your head-scratching Liverpool form, Ryan. Via The Guardian