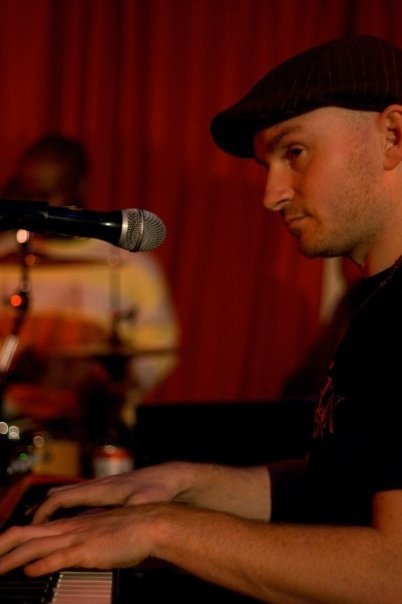 Steve is a multi-instrumentalist, composer, producer and music educator based in Southeast London.

As a performer Steve’s credits have been mainly as a session keyboard player performing live with several Funk and Soul artists from the US on the European legs of their tours. Steve has performed live with Archie Bell and the Drells, Steve Arrington (Slave), Jean Carne, Shirley Jones (The Jones Girls), Meli’sa Morgan, Glenn Jones, Surface, Yarbrough and Peoples and Garfield Flemming (The Delfonics) amongst many other as well as having had the honour to be invited to MD the band for George Clinton’s (of Parliament and Funkadelic fame) master class at LCCM.

Many of these live sessions were with long-time collaborator and school friend guitarist Tim Jones, together they collaborated with Detroit Soul Singer Alicia Myers on her comeback LP ‘Peace of Mind’ which toppled the UK Soul Chart in 2011 with Steve co-writing 5 tunes on the record as well as handling keyboard duties.  Steve contributed a further song and Fender Rhodes on a number of tracks to the self-titled ‘Lovetown Allstars’ release that also topped the UK Soul Chart in 2013.

Steve’s musical interests extend well beyond any one genre, and he is currently working as musical director and keyboard player for Brownswood Records signing ‘muva of Earth’ a self-defined alternative jazz singer and ascending soulstress. Steve co-wrote and produced her first single for Brownswood titled ‘High’ released in summer 2022 with more material to come on her debut EP later in the year.

From 2012 to 2018 was a member of Art Rock band Tonochrome whose music draws from an eclectic range of influences that include Jazz, Grunge, Pop, Progressive Rock and Contemporary Classical music. Steve played keyboards and co-produced 3 EPs and an album with the band, co-writing and producing a number of songs on the band’s debut album ‘A Map in Fragments’ released on Bad Elephant Records in 2018.  Steve also works closely with vocalist Jaelee Small co-producing her debut EP, released in 2019, and playing keyboards for her live show. Away from Jaelee’s original music they also run in-demand UK party band ‘The Black Hat Band’ with whom Steve has performed 1000’s of gigs all over the globe over the last 15 years.

As a musical educator outside of his role at LCCM Steve specialises in the development of young musicians and artists in Southeast London.  Steve has been lead tutor and programme developer on the ‘All About The Band’ project since its inception in 2014 programme, the project looks to develop singers and musicians live performance skills through a series of workshops and live events.  From 2017-2020 Steve worked as an in-house producer at Peckham Studios, a community-based studio project run by the charity Groundwork to develop young original artists in Southeast London. The fruits of this work included the production of debut releases for up-and-coming artists, ‘Akin Soul’ and ‘Sariah Rowe’.